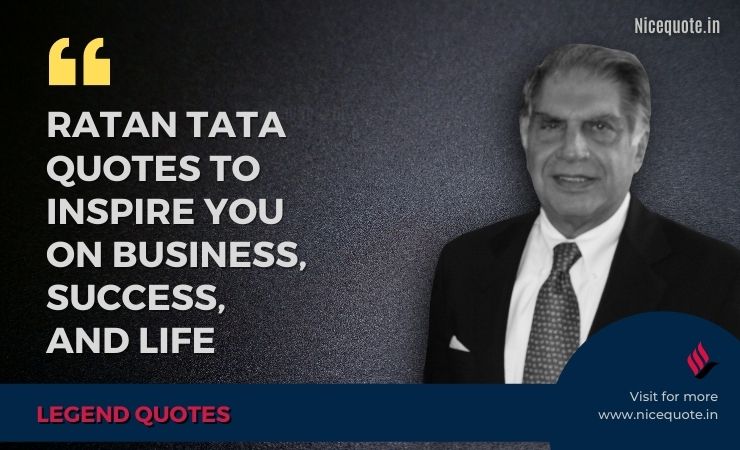 In This post, I have come up with the collection of ‘Best Ratan Tata Quotes‘ that will inspire you to succeed in life and business. I hope you will like this.

Ratan Tata is one of the most famous names among Indian businessmen. He is a business tycoon in India. Ratan Tata Quotes and thoughts are inspirations for every people to succeed in life.

1. “Take the stones people throw at you and use them to build a monument.” – Ratan Tata

2. “I don’t believe in taking the right decisions. I take decisions and then make them right.” – Ratan Tata

4. “Ups and downs in life are very important to keep us going because a straight line even in an E.C.G. means we are not alive.” – Ratan Tata

6. “Don’t educate your children to be rich, educate them to be happy. So when they grow up they will know the value of things, not the price.” – Ratan Tata

8. “All of us do not have equal talent. Yet, all of us have an equal opportunity to develop our talent.” – Ratan Tata

9. “Deal with crisis in such way that you can hold your head high and sleep well at night.” – Ratan Tata

10. “We should always follow someone who has more experience than us” – Ratan Tata

11. “Business needs to go beyond the interest of their companies to the communities they serve.” – Ratan Tata

12. “Polish you talents like you would polish your diamonds.” – Ratan Tata

13. “Challenges need to be given to an organization.” – Ratan Tata

14. “People still believe what they read is necessarily the truth.” – Ratan Tata

15. “Don’t train your brain to think like everyone else but instead, train it to question, doubt, and seek the answer.” – Ratan Tata

16. “We should not be so serious in life because life is more fun to live when it surprises us constantly.” – Ratan Tata

17. “Be true to your work because it is very easy to spot a CEO who is not fond of his work and it is very upsetting for those who look up to you as an inspiration.” – Ratan Tata

20. “A truly rich man is one whose children run into his arms when his hand are empty.” – Ratan Tata

21. “If there are challenges thrown across, then some interesting innovating solutions are found. Without challenges, the tendency is to go on the same way.” – Ratan Tata

22. “There are many things, if I have to relive, maybe I will do it another way. But I would not like to look back and think what I have not been able to do.” – Ratan Tata

23. “I admire people who are very successful. But if that success has been achieved through too much ruthlessness, then I may admire that person, but I can’t respect him.” – Ratan Tata

24. “I have always been very confident and very upbeat about the future potential of India. I think it is a great country with great potential.” – Ratan Tata

25. “Young entrepreneurs will make a difference in the Indian ecosystem.” – Ratan Tata

26. “I would say that one of the things I wish I could do differently would be to be more outgoing.” – Ratan Tata

27. “Apart from values and ethics which I have tried to live by, the legacy I would like to leave behind is a very simple one that I have always stood up for what I consider to be the right thing, and I have tried to be as fair and equitable as I could be.” – Ratan Tata

28. “Always take a decision for even little things in life because it will make your path easy to walk on.” – Ratan Tata

29. “Never judge while taking any decision that whether it will turn right or wrong. Just take it by following your instinct because you will always get the chance to make it right.” – Ratan Tata

30. “There are many things that, if I have to relive, maybe I will do it another way. But I would not like to look back and think about what I have not been able to.” – Ratan Tata

I hope, this ‘Ratan Tata quotes collection’ will change your life if you follow these in your life. If you like this post, Do share this with your friends on social media. Thank you for visiting the site.

Join Us on Social Media